DISCLAIMER: This piece contains major spoilers to Your Name. and potential minor spoilers to two of Shinkai’s earlier films, 5 Centimeters Per Second and The Garden of Words. If you’ve not yet seen Your Name., you should frankly leave now. I don’t want that kind of blood on my hands. Regarding the other two works, continue at your own risk, though I don’t think I discuss anything that can’t be inferred from their synopses and opening minutes.

Also this piece is my (Yatahaze’s) own personal reflection and not necessarily indicative of all of us at For Great Justice, though we did all enjoy the film, so take that as you will. 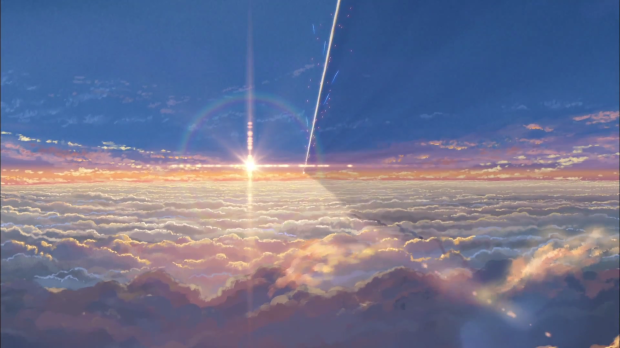 “Is it for you to say that we be lovers in another life? / If all the stars align in the way we love life, it’s nothing short of a miracle. / Hey, Big Star, you shine too bright. / I’m in love with you, I’m your comet tonight. / Swept me away in your blinding sun. / We’ll melt someday into each other.”
– Kishi Bashi, “Hey Big Star”

Two nights ago, I went out to my local movie theatre and attended the American premiere of the box office record-busting Your Name. with a group of five friends, all of whom had at least some experience with anime and a few of whom were already familiar with other work by its writer and director Makoto Shinkai. One of the few who wasn’t expressed something to the effect of how she “wasn’t expecting to get her heart ripped out,” a sentiment which the rest of us poked a little fun at afterward.

That’s certainly an understandable thought for anyone unfamiliar with his style; Shinkai is often revered within the anime community for his breathtakingly beautiful visuals, and on a list of “things that come to mind when you think of Makoto Shinkai,” emotionally-charged direction usually isn’t far behind. Two of his most beloved previous films, 5 Centimeters Per Second and The Garden of Words, were short, bittersweet love stories whose characters’ romantic pining failed to come to fruition. In the former, distance and time kept the potential couples apart, while in the latter, an uncomfortable age gap and one-sided honesty between the protagonists doomed their chance at a deeper bond. That’s massively simplifying both stories of course, and I actually don’t even view Garden as much of a romance in the first place these days, but I feel it’s necessary to mention them in order to stress that Shinkai’s hits don’t often conclude with a happy ending. I can’t say I was expecting one this time around either. 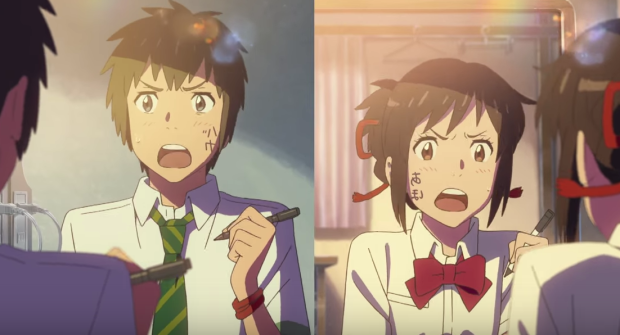 But damn, he surprised me. Your Name. was an outlier, featuring a surprisingly uplifting and charming finale to what I feared for the previous two hours of my life would be an utter tragedy. And yet between my conversations with friends and some online browsing afterward, I was equally surprised to see people felt like they had indeed witnessed a continuation of Shinkai’s tearjerking conclusions.

Obviously, everyone should have the right to interpret art as they wish, and this film certainly didn’t give audiences a shortage of ideas to think about. But to me, Your Name.‘s conclusion presented an unquestionably bright, glimmering future for its two protagonists, Mitsuha and Taki. Their meeting on a Tokyo stairwell several years down the road from the movie’s climax is just the start, too: Your Name.’s happy ending is more accurately what we don’t see, the whole rest of Mitsuha and Taki’s lives. In the wake of an averted external disaster but years of suffering internal longing, the ability for the two of them to form new, permanent memories at last presents itself, and they appear to seize the opportunity. That sounds a little conventional on paper, and separated from context, I’d agree it’s hardly anything out of the ordinary, but for me, much of Your Name.‘s (non-visual) impact came in unspoken details, and that’s precisely the case for its epilogue as well. 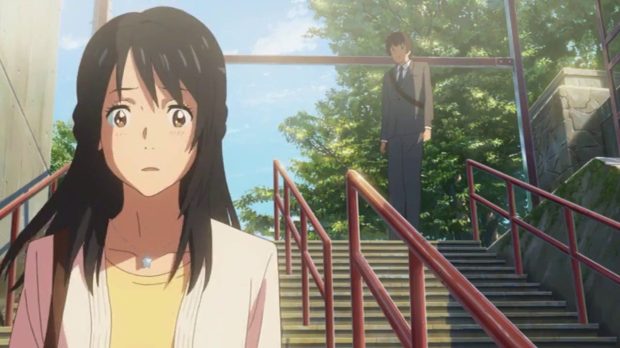 Shinkai’s tales often take the form of love stories, but they’re rarely only that. In Your Name., Shinkai bait-and-switches the audience, plopping us into a body-swapping rom-com at first, but ultimately exploring what happens when major events (in this case, the Itomori meteorite disaster) turns into forgotten background noise. Despite only taking place a mere three years before his timeline, Taki barely remembers the catastrophe, and while Shinkai’s explanation seems to lean on the “it just felt natural for the story” excuse, he admits the 2011 Tōhoku earthquake & tsunami (which killed upwards of 15,000 people, initiated a nuclear meltdown at a Fukushima power plant, and remains the costliest natural disaster in recorded history) was a direct inspiration. What happens to those who had connections to towns and people erased from the world? How do they remember those aspects of their past? And do they even try to rebuild?

To that end, memory plays just as critical a role in the film’s progression as the relationship itself. Taki’s expedition to Gifu is kickstarted when he sees sketches of Itomori in a nostalgia-fueled art exhibition, implying that someone else who knew (or at least visited) the area refused to let its previous presence disappear from the world entirely, even if the meteorite had other plans. The whole “let’s save our town” plot climax worked equally well to this end, bolstered by the undercurrent of internal anxiety the protagonists faced when they realized that failure could result in never remembering one another again, a prospect just as scary as dying themselves. 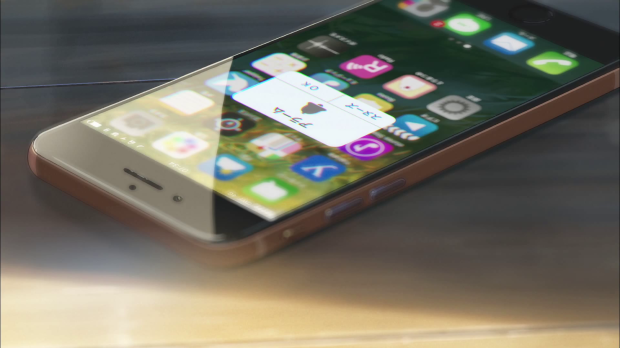 They try loopholes without realizing it early on, documenting their activities in notebooks and phone memos long before the movie’s later twists are even introduced, but that physical evidence vanishes just as quickly as their connections to it do when their memories disappear, as if to emphasize that objects and messages mean nothing without the connotations we bestow upon them. Therein lies the element which I think hit me exceptionally hard: how often we take for granted the treasure of a working memory.

If you’ll indulge me in an anecdote, I witnessed firsthand my grandfather’s decline into Alzheimer’s over a period of several years which felt excruciatingly long for my family and likely even longer for him. Before he eventually succumbed to the disease, much of the happiness he enjoyed throughout his life seemed cropped out of his mind for good, to the point that even photographs and stories he once loved seemed to mean little to him. With his increasingly deteriorating memory, he often forgot his own diagnosis and was prone to fits of frustration and incoherence. I always got the impression he knew something was incorrect and empty within him but he couldn’t deduce what it was long enough to express it. Witnessing him emotionally and physically break down is something that’s irreversibly changed my life and taught me to never take a memory or moment for granted. Knowing Shinkai and seeing the trajectory the film was traveling on, I started bracing myself for the most poignant of endings. It wasn’t beyond his power to direct that the protagonists fail their mission, never meet again, or meet but fail to recognize one another for good.

But he granted them the best possible scenario, and this is perhaps why the ending to Your Name. felt like such a victory to me. Even cloaked in the sadness of several years’ separation, when Mitsuha and Taki reconvened, the weight of absence felt lifted off my shoulders as much as theirs. Owe that to Shinkai’s empathetic character writing or what have you, but I deeply cared for – if nothing else – that these folks got the chance to forge a lasting connection to offset the voids that plagued them without a solid definition for so long. They may still face hardships after the credits roll, and for every disaster averted, there’s bound to be another that occurs elsewhere, but as I sat there stunned and speechless in my seat as “Nandemonaiya” played, still taking in the heaviness of those closing moments, I was able to recognize my emotions registered on the “sweet” side of “bittersweet” for once.

For that, I wasn’t just pleased, I felt thankful. Thankful to Shinkai for switching his signature ending up, sure, but mostly thankful that someone out there so passionately depicted the crippling loneliness of losing precious memories and the beauty in regaining the means to create more. For some, Your Name. will remain a sad story, and if that’s the sensation that speaks to their own lived experiences, more power to them, but I can’t view it as anything less than an exemplary success for that very reason. Without ever becoming too abstract, Your Name. is adventurous and tactful enough to offer solaces and sorrows individual to every person who sees it. It’s a film that feels larger than life in its humanity and humility, in awe of connection, understanding, and the world in which it’s set, and if you know anything about me, you should know that some possible nitpicky mechanical plot holes aren’t enough to keep me from recommending it on those merits for years to come.