I’ve linked Cornelius’ take on “Brazil” there because his version of it is a personal favorite of mine, though that’s far from the song’s only rendition. Originally composed by Ary Barroso in 1939 as “Aquarela do Brasil,” it’s since become one of the most-covered songs in the world, with names as notable as Frank Sinatra, Santana, João Gilberto, Arcade Fire and many many more lending their take to this timeless classic about timeless feelings. Love and longing are cornerstones of art because they’re cornerstones of the human experience, and even the tritest of concepts can become enthralling when delivered with heart. The right ambiance and a couple of curveballs don’t hurt either. 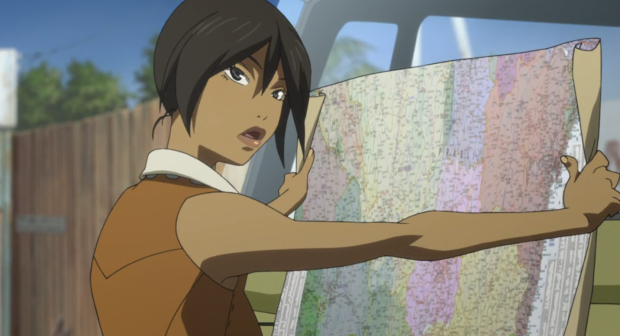 And let’s get one thing straight, Michiko & Hatchin, coincidentally set in some sort of pseudo-Brazil, is enthralling, and yet, much like that song, it’s not anything you’ve haven’t seen before. Sure, there are gang fights and hokey drama and all that good ol’ pulp action stuff which makes it a versatile tale that fans of several genres can find something to enjoy in, but it’s not about shootouts or revenge or any of that.

And by that, I mean it’s really a love story. Several love stories, actually, few if any of which result in a conventional, lovey-dovey, happy ending. As early as the series’ fourth episode, we witness a sour, one-sided relationship between a nightclub dancer, Pepê Lima, and her pathetic boyfriend/boss/favela overlord Rico. Some time later, Hatchin befriends a young circus performer named Rita who’s all flustered over failing to attract the attention of her significantly older crush. At one point, Michiko finds herself emotionally upset over the sexual advances of a man named Bruno who’s cheating on his wife. And even Hatchin, despite being ten and fed up with Michiko’s perceived fixation on men, lets her guard down after the kindly amnesiac Lenine opens up to her in a manner that goes from overbearing to adorable real fast precisely because their time together was doomed to be so short-lived one way or another.

But I’m getting ahead of myself with supplementary examples. Let’s back up a bit to its main one, because the series’ 3-month adventure is essentially entirely predicated in Michiko’s refusal to let go of an old flame, Hiroshi Morenos, also Hatchin’s father. They both used to belong to the gang Monstro Preto, headed by the ruthless leader Satoshi Batista, before internal disputes tore their lives in separate directions and Hiroshi attempted to leave, “dying” in a bus explosion while Michiko was in prison. When she busts out, she denies the possibility that Hiroshi is dead, tracking down Hatchin and snatching her away from the clutches of an abusive foster family with the promise that they’ll find their man.

At that point, we have no reason to believe that they’ll succeed or fail, one way or the other. Yes, Michiko is a wanted felon who essentially kidnapped a child and the two of them have to contend with non-stop run-ins with the police, rival gangs, old grudges, and random pickpockets while they search for Hiroshi, but if there’s anything the first few episodes prove, it’s that this duo can handle it and keep their eyes focused on the prize.

But that’s exactly the problem, as becomes increasingly clear while trekking from city to city looking for leads: the Hiroshi that Michiko is chasing is less of a person than he is an excuse, a shadow of the man she once knew. Though Michiko slowly breaks down with reminder after reminder that he left her with conviction and Satoshi ardently defends his once-comrade as trustworthy, we can infer far more about Hiroshi’s character by the fact that we almost never see him. Though we’ll later witness that his behavior has never really changed, he is not the person that neither Michiko nor Satoshi thought they knew. He has moved on, blown along by each moment’s whim, and though he won’t reject these figures of his past when they show up in front of him, he also shows no resolve to address his habit of taking off with unfinished business.

And in the end, he does just that. After they at long last reunite, Michiko sends a reluctant and shielded Hatchin off with Hiroshi, and he predictably abandons her within a few months, just like he abandoned Michiko, Monstro Preto, and just about every other connection he’d made in his life. But Hatchin adapts to this change rather quickly, and for Michiko, who drives off into the desert on her signature bike alone of her own choosing, this marks the turning point where she finally buries the hatchet on all that nostalgia and denial. Before this, she’d promised to never let Hiroshi go, following him wherever he’d run. He was “hers,” in her words. But it’s inevitable that she’d move on eventually: whether it proved fatal, as was the case for Pepê Lima, or offered peace of mind for Rita or another one of Hiroshi’s lovers, Elis, almost every unhappy or neglected love interest in the show pressed forward for their own sake when given time. The few who didn’t – Anastácia, Bruno’s wife, comes to mind – accepted a life of dreary compromise that just never seemed fitting for a soul as headstrong as Michiko.

And yet that running from the past, be it one stricken with abuse or just filled with dead-ends, is all that Hiroshi did. In Michiko & Hatchin, running away is both a laudable solution and a self-gratifying coping mechanism depending on the situation. Despite never firing a bullet in the present, Hiroshi appears to be the series’ true villain; after all, what kind of heartless bastard would abandon their own young daughter twice for momentary thrills? But he himself is just a flawed man searching for happiness by escaping the presence of his failures and ties. It seems harsh, but only because for the whole series, he had been built up as some mythical wonder-boy: a perfect lover, a reliable friend, a charming TV personality and entrepreneur. Hiroshi is none of these things, and neither is anyone in the cast. Misguided by their own interpretations of memories, it ultimately wasn’t the older characters who knew him that really knew him, but the young girl he’d never met who could see the fallout of his actions on her trail to their source.

There’s something cathartic in that escapism though, the feeling that every day presents a new opportunity to write a new chapter in a story that lacks direction with glee. The show itself reflects that, simultaneously tightly chronological but rarely staying on any train of thought or immediate conflict for longer than one episode at a time. Our protagonists aren’t its only heroes either: Michiko’s rival-turned-police officer Atsuko undergoes her own redemptive arc, Satoshi is forced to fend for himself when his underlings rebel for his position, and side character after side character is treated with the same fleshed-out respect as the leads…with a few comical exceptions.

And for that, I can’t help but adore Michiko & Hatchin. “Journey > destination” shows tread right up my alley anyway, but I rarely walk away from one with the notion that every character involved is in the middle of their own personal journey as well, constantly intersecting and trading advice, blows, and support. I suppose there is ultimately a destination for our protagonists, but it’s not a physical one, be it a place or a person. Rather it’s a journey of emotional growth that leads to the acceptance that we’re all on our own paths in life and should treasure the steps yet to come just as much the footprints we’ve already left. That’s not to say you can’t have a blast recalling the thrills of your love, just that you shouldn’t live in pursuit of re-attaining something that no longer exists and may have been all in your head in the first place. Instead, treasure the new bonds you form, the new roads you travel, and the growth you undergo along the way. Again, not the most original concept ever, but like “Brazil,” it’s the resonance contained within that matters the most.

Feel free to leave a comment below or check out some of our other recent pieces, such as our Spring 2017 Season Final Thoughts or my fellow writer Haru’s retrospective from this year’s A-Kon. Our summer first impressions should be out in about two weeks. Until then, this has been Yata of For Great Justice. Thank you for reading!