Hey, y’all. Yata here. On top of FGJ’s home country still completely fucking up this whole pandemic response thing, it’s officially Too Fucking Hot™ out, and you know what that means: summer is here! Normally staying indoors and bingeing some anime sounds like our idea of a fun time, but the mood turned sour twofold over the last few weeks; Haru has been feeling ill for the better part of a month and while his doctors have run tests concluding that what’s ailing him isn’t COVID-19, his top priority right now is getting rest and not stressing himself out over writing words about cartoons.

The second issue is that the anime industry itself got set back from when this crisis had its wave over in Japan last season. As a result very few shows—I haven’t run the numbers, but probably the fewest we’ve seen in about a decade or close to it—are airing weekly for the next 3 months, and that’s before taking into account how transparently mediocre most of the surviving batch is, or how two of the biggest hype-titles of the summer dropped in non-weekly formats. Masaaki Yuasa and Science SARU’s new adaptation Japan Sinks 2020 went live all at once, and I loved it so much I intend to give it a proper article of its own, so expect that within a few weeks. Studio Wit’s new title Great Pretender also seems cool, and I say “seems” because I actually haven’t gotten around to it yet; its first half came out in arc-length increments, but it likely won’t leak the second half until the fall, so I’m tempted to hold off for now and just watch it then.

What remains are slim pickings, but if there’s anime airing, someone’s gotta cover it, and here I am to answer the call. What’s worth tuning into weekly between now and September? Hell, what’s even airing, like, at all? Buckle up, ’cause it’s time for some first impressions.

END_OF_DOCUMENT_TOKEN_TO_BE_REPLACED

It’ll be New Year’s in less than an hour but it’s still technically 2019 here in the U.S. and by golly, if barely squeezing in our final thoughts on seasonals at the last hour isn’t the most On Brand move possible, I don’t know what it is. We’re making it work, though; 2019’s coming to a close and we’ll have some year-in-general posts throughout January, but before that, it’s time to qualitatively rule on what we thought of this fall’s offerings. Buckle up and never mind the inevitable lapses in proofreading. 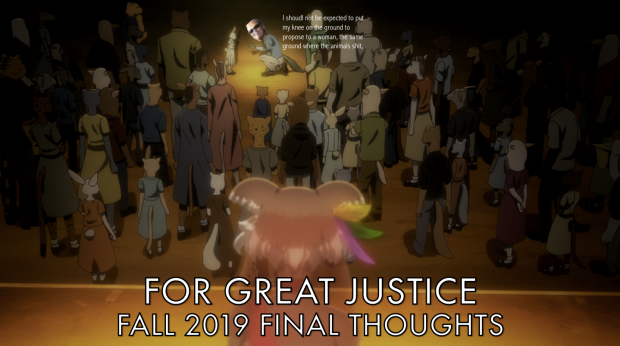 END_OF_DOCUMENT_TOKEN_TO_BE_REPLACED

Put Sword & Shield down. Block out the fact that the holidays are right around the corner. Anime is still airing and for the next however many minutes, we here at For Great Justice are gonna do our damn best to remind you about that. Thankfully, that shouldn’t be too hard; this fall is full of great titles and slow-burning underdogs that could snowball into best-of-the-year contenders if all goes well. Halfway through the season, here are Yata and Haru with their thoughts. END_OF_DOCUMENT_TOKEN_TO_BE_REPLACED

October has brought a nor’easter to Yata’s corner of the country and tornadoes to Haru’s neck of the woods, but neither could keep us from the better stuff this month had to offer: a whole new slate of anime to check out. It’s the final season of the year and the decade as well, so we each approached this crop of shows with some contemplation and a secret desire to free up some other time. That turned out to be more difficult than expected, however. It may not be quite as loaded as this winter was, but these fall shows aren’t slouching. Which ones have we thinned out? Which ones are our early favorites? Find out below on this update from For Great Justice!

END_OF_DOCUMENT_TOKEN_TO_BE_REPLACED

It’s that time of year again; the time of year where we try to wrap up our thoughts on whatever shows we stuck with this past spring…except like clockwork, no one’s listening because our audience is having a blast at Anime Expo without us. It’s cool, we get it, we only have…virtually nothing to be excited about next season. Even if it’s purely for indulgent, self-reflective purposes, spare us a few minutes and join Yata and Haru in taking one last trip down memory lane, covering whatever they’ve caught up with or completed from the latest season in the books. 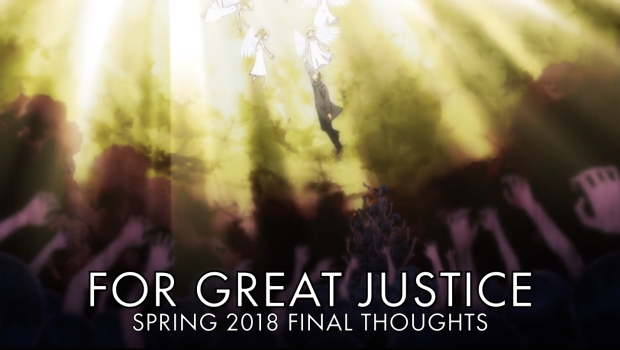 END_OF_DOCUMENT_TOKEN_TO_BE_REPLACED

Hello, everybody, and welcome back to For Great Justice. For…hopefully obvious reasons, none of us actually kept up with Darling in the FranXX after its first cour, and this spring, which was already one of FGJ’s lightest in terms of seasonal anime coverage, is about to get even lighter. While a select few shows have confidently muscled their way to the top, others have grown trite and lifeless, which means one thing: drop time. Find out what titles Yata and Haru spared and which they let go of on this mid-season update!

END_OF_DOCUMENT_TOKEN_TO_BE_REPLACED

It’s the first impressions roundup you’ve all been waiting for!

…that is, unless you’ve been waiting for one that enthusiastically covers all the reboots, spinoffs, and mega-franchise hits airing this season, because this roundup includes almost none of them. Not to worry, though—a couple of them are on our marathon backlogs, which just means we weren’t going to cover them weekly anyway, and there’s too little time to check the pilots of shows where a “hold” outcome is inevitable. Instead, Yata and Haru mostly had a field day with spring’s brand new offerings and wound up with one of their most selective weekly schedules yet, but not for a lack of trying. What’s sticking around? What’s out early? And why do these fucking horsegirls not overthrow humanity and become Earth’s dominant species? Answers to two of those questions lie below. Read on! 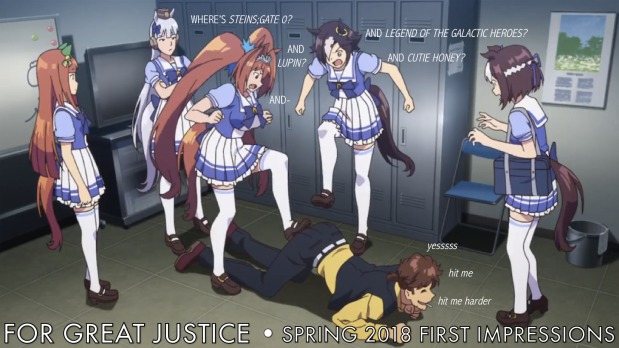 END_OF_DOCUMENT_TOKEN_TO_BE_REPLACED

Oh, quit yer cryin’! Yeah, 2017 was great, and this fall was stacked in particular, but all good things must come to an end. With the new year practically on our doorstep, we can’t wait forever to wrap up our final thoughts on this season’s offerings. Which shows stuck the landing? Which ones did we awkwardly watch faceplant over and over? And – could it be? Is there a 10/10 lurking below? We’re sure you’re looking ahead to 2018 by now, but the fall needs closure, and Yata and Haru are here to give it to ya.
END_OF_DOCUMENT_TOKEN_TO_BE_REPLACED

The holiday season is imminent and we’re trudging through the end-of-the-year work rush, but it’ll take a little more than that to stop Yata & Haru from scribbling together some updated thoughts on (most of) this fall season’s hit series. Which ones are exceeding our expectations? How are the numerous sequels of the season faring? And most importantly, which shows are we letting go of now that we’ve given them a fair chance? The answers may surprise you – read on!

END_OF_DOCUMENT_TOKEN_TO_BE_REPLACED

Hey there, everyone, and welcome back to For Great Justice! You know what time it is – that time every season where we watch everything that catches our interest over the course of two weeks then try not to develop carpal tunnel writing about them. Which was especially brutal this time, ’cause in a year already stuffed with several new great hit titles and a handful of superb sequels, this fall doubled down on both for one of the most packed seasons we’ve had in a while. There are a lot of series worth highlighting and we’re pretty eager to tell you about them, so let’s just jump straight into it. Here are Yata & Haru’s fall 2017 season first impressions.