Another year of anime in the books, y’all! 2022 was full of teases and delayed gratification—hyped hits of yore received middling continuations, several less than stable productions were forced to hiatus, and the year undoubtedly peaked in its final season, the three leading up to it sorely lacking contenders for all-time great status. But peak it finally did, and now that the end is upon us, it’s about time to give y’all my personal recap, repping every show I checked out, ranging from atrocious one-and-dones to my absolute favorites.

Not much change in the layout this time; I’ll start by listing some of the easiest drops, work my way up to ones I wouldn’t have minded continuing under better circumstances, then hop into what I did finish, from regrettable letdowns I wish I let go of earlier to honorable mentions that barely missed my top ten. Those ten studded titles have earned their own blurbs as a longer pitch to sell you on their strengths, and in between the two halves of the list, I’ll also mention any anime films I saw which received a screening or streamable release in the U.S. in 2022 (though they may have premiered abroad earlier than this year).

The tier titles this time are quotes courtesy of Brian David Gilbert, whose videos I have binged to keep me sane over the last month or two. They’re just what were freshest on my mind—and many of them fit what’s coming uncomfortably well.

Without further ado, here’s my anime recap of 2022:

And just like that, another year’s over. 2021 was one hell of a mixed bag for me personally, but as far as anime’s concerned, it seems like one of the most productive years for the medium in recent memory. You have to look at the big picture, though; half the reason this year was so unforgiving in its deluge of output was due to pandemic-delayed series finally seeing the light of day. Factor in the industry trend of increasing quantity (I tried over 100 anime this year—that’s a first), and if you were bored by anime in 2021, you must not have been looking hard enough for stuff to enjoy. There was plenty of it.

…And a lot of forgettable filler, as the laws of proportionality would have you suspect. The following rundown aims to cover all of them, starting with the premieres I curiously tried for an episode or two but nonetheless dropped. After those I’ll do the same for shows (and movies) I finished, with my top ten picks each receiving their own dedicated entry. Everything before the top 10 isn’t individually “ranked” per se, just grouped how I see most fit to illustrate the impressions they left. Those groups need names, and keeping these tiers aligned to a theme helps get the point across better, so this year, let’s go with uhhhhhh quotes from that one A/C Repair skit. Why? Why not? It had to be something.

Without further ado, let’s send out the year with the little diligence I have left and a boatload of sass.

END_OF_DOCUMENT_TOKEN_TO_BE_REPLACED

The end is near, oh, thank God, the end is fuckin’ NEAR. Every year I whine “waaah this year sucked, yadda yadda, on to next year,” but uh, holy shit, 2021…please, I’m begging you, no new viruses, alright? Maybe some slightly more competent political leadership while we’re at it? My expectations are still low, but for as long as the current situation remains a thing, I’ll be using the free time I get to stare at a screen and watch cartoons. That’s just what we do around here at For Great Justice, and if anything made 2020 bearable, it was the one-two pick-me-up of watching anime—some fantastic, others horrendous—and then chatting about them with my pals online.

With a new year (and an absurdly stacked winter season) on our doorstep, it’s time to reflect with one final article on what 2020 meant for anime. Some might define it by pandemic delays, others by a smattering of sequels that brought magnificent closure to huge franchises. For me, breakout original productions mostly stole the show, but we’ll get to those in due time—first, I’ve gotta explain what exactly I’m doing here. 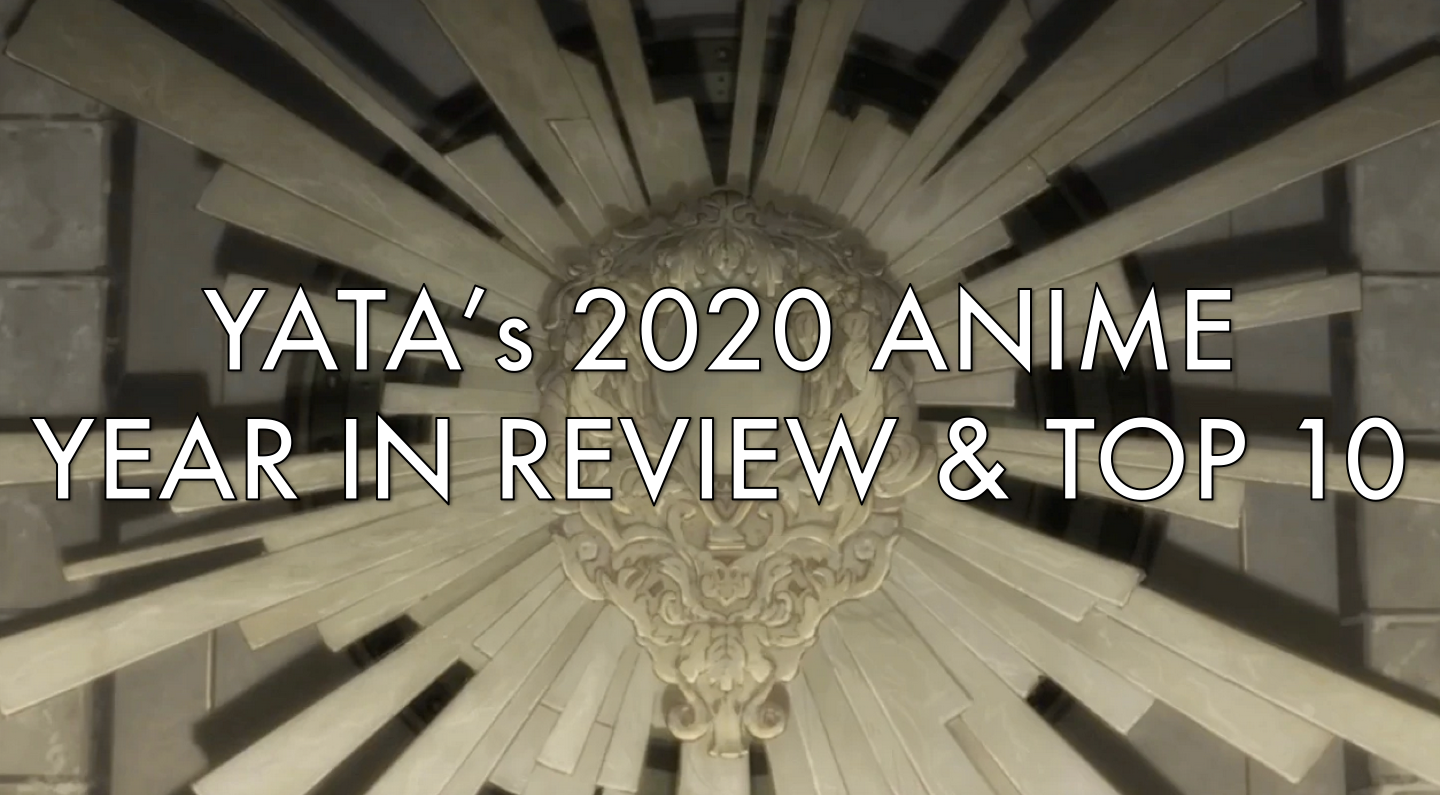 END_OF_DOCUMENT_TOKEN_TO_BE_REPLACED

This has been a weird week. I’ve been cooped up at home with a nasty, fatiguing cold I can’t seem to shake, one of my “bands” just put out our massive new album, and as I type this, “World War III” has been trending for about 24 hours and I’m sure we won’t hear the last of that soon. But I’m here today to say farewell to something else: 2019. More specifically, the anime it had to offer us. Last year brought the decade to a fair enough close; there wasn’t a ton of close competition for the top spots on this list (especially because my beloved My Hero Academia and Chihayafuru won’t wrap up their current seasons until this spring and are thus ineligible this time around), but I still feel satisfied with the best of the best that we got.

If this ain’t your first rodeo here, you know how this goes. If you are new, here’s how I do this: I’m gonna briefly and remorselessly oversimplify my thoughts on each of the 30-something shows I dropped early from 2019 followed by expanding a bit more on the 30 or so shows (and movies) that I saw to completion. All those entries are clustered in tiers (this year named after quotes from one of my band’s most iconic tracks) until the top 10, which get their own special individual treatment where I do my best to sell you, casual watcher, diehard, or anywhere in between, on my favorites. Sound good enough? Rad. Let’s get crackin’. Here’s my all-in-one reflection on anime in 2019. 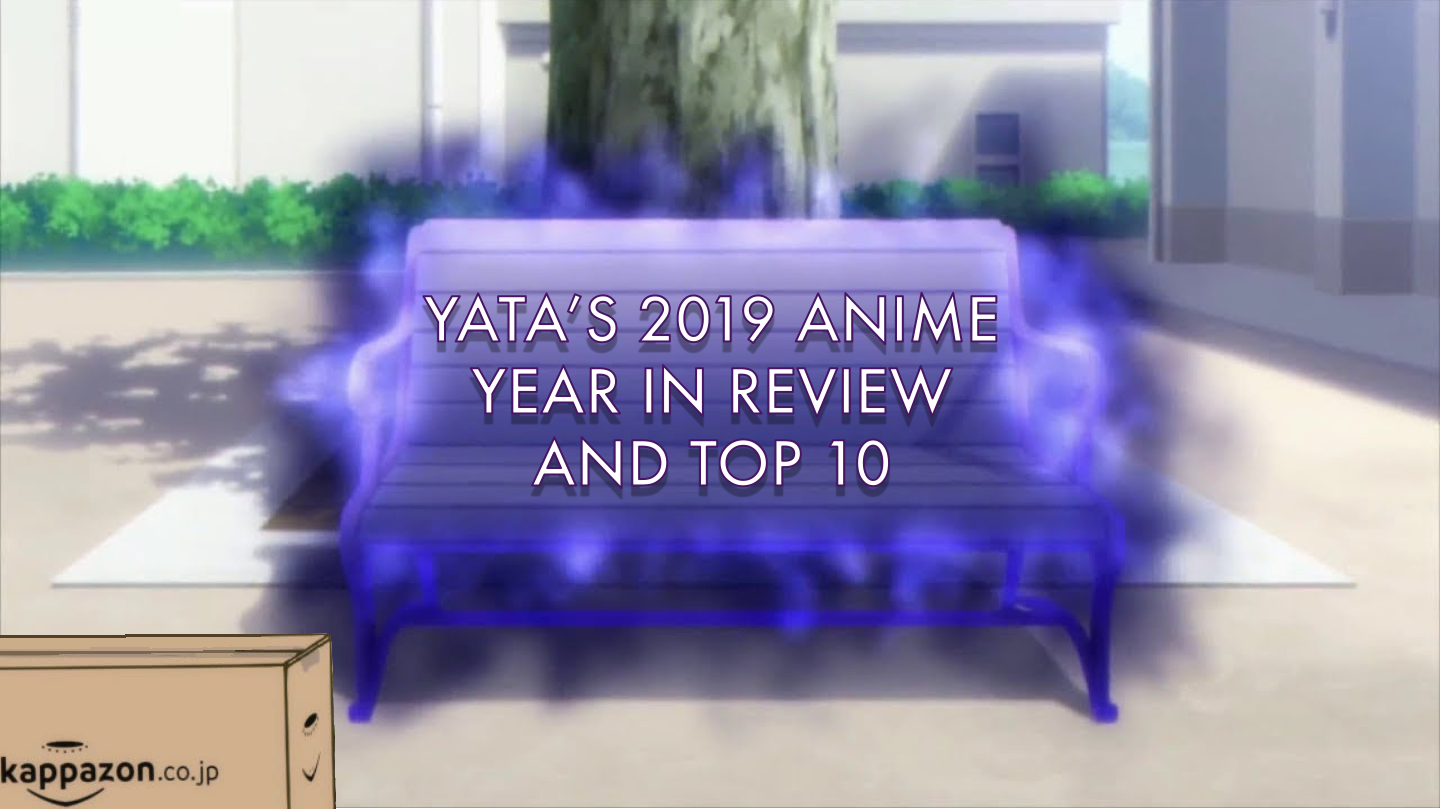 END_OF_DOCUMENT_TOKEN_TO_BE_REPLACED

Alright, 2018’s done, my big ol’ annual music writeup’s been published, and now all that’s left on my plate is rebooting this place. First of all, thank you so much for your patience throughout For Great Justice’s hiatus the last several months. It should operate at normal capacity again starting this month, with the three usual seasonal coverage articles as well as Weekly Rundowns over on my Twitter.

Our little hiatus from covering anime didn’t extend to me taking a break from actually watching it, however! In addition to a handful of movies, I completed 31 seasonal series and dropped 38, making good on my resolution to be a bit more selective about what I do with my time this year.

The dedicated otaku among you are bound to be familiar with most or all of these titles already, but the goal of this list isn’t just to recap what I loved this year. I’m also aiming to give people who don’t follow seasonal anime often or at all an idea of what they might enjoy from 2018 regardless of whether or not I did. Still, I’m gonna be pretty blunt about what I personally thought of these shows, so if you loved something I couldn’t stand or vice versa, do not view any of what follows as a personal attack. These are just my quick, oversimplified takeaways.

As usual, this will be done in tiers until the Top 10, which all get their own dedicated entries. We’ll start with the worst of the dropped titles then gradually move up to the completed, more positive ones. Sound good to y’all? I’m ready. I’m more than ready. Welcome to my 2018 in anime! 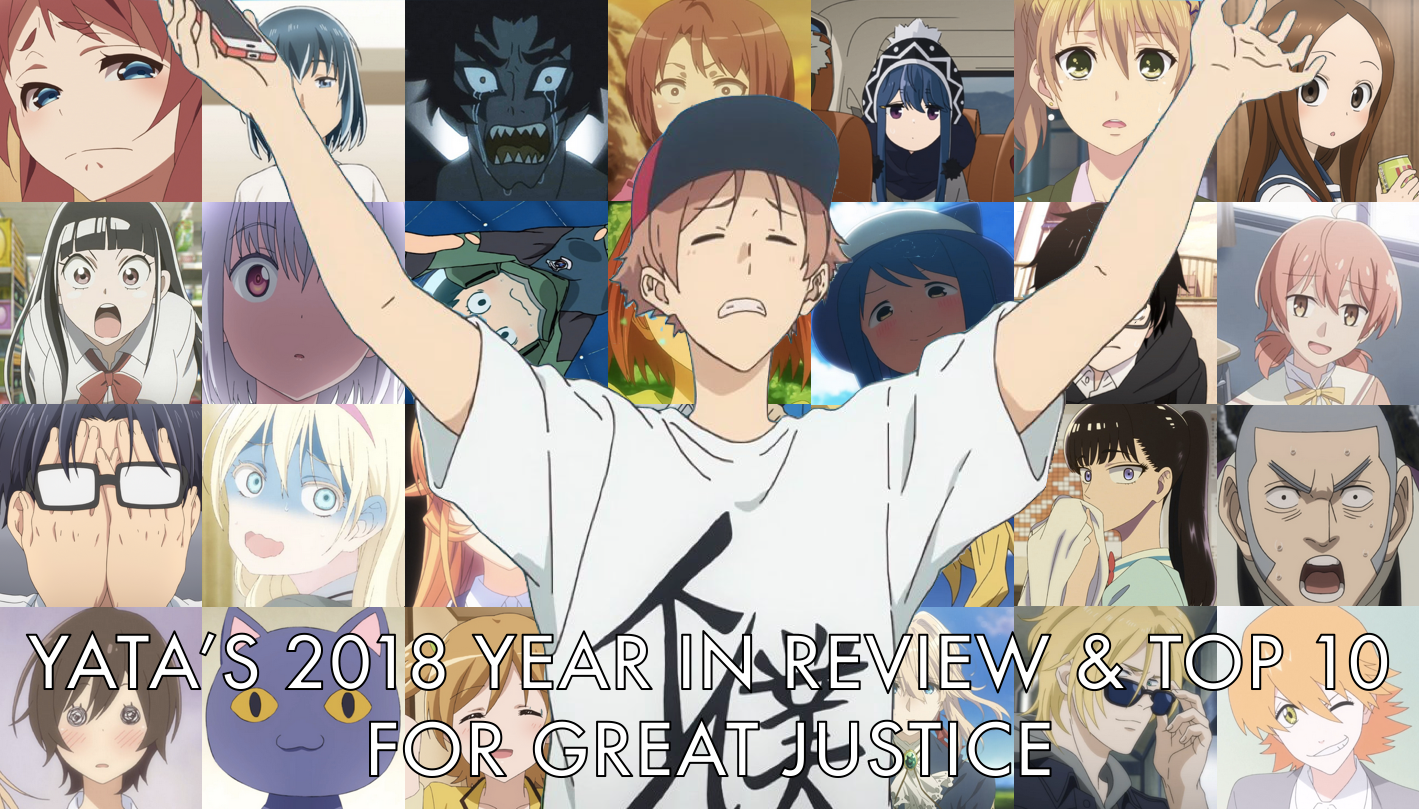 END_OF_DOCUMENT_TOKEN_TO_BE_REPLACED

Another year’s here, another year’s in the rear-view mirror. Even though my 2017 personally ended up less stressful than the previous few years, I still wouldn’t argue the notion that this past year was overwhelming, pessimistic, and frustrating.

…well, except for anime. I ended up watching more anime this year than I had in long time, and a lot of it was fantastic! From airing titles alone, I completed roughly 40 series and attempted around 30 more. Add to that a handful of superb movies and for me this year was anime’s best in recent memory in terms of both quantity and quality.

Whether you have a casual interest in anime or you breathe this stuff like oxygen, someone seasoned in ani-culture or someone completely oblivious to it, my goal with this spoiler-free 2017 Anime Year in Review is to give you a concise guide to everything I checked out from the past year and supply you with just enough background for you to determine whether or not you might dig each title. Obviously my opinions are subjective to my own personal preferences, and keep in mind that this is the one time each year where I really double down on the stuff I loved and hated. If you liked something I despised or vice versa, do not view any of what follows as a personal attack. It’s just my quick, probably oversimplified thoughts.

So here’s how we’ll do this. Instead of ranking every single show, half of which I didn’t even finish, we’ll leave the detailed, numerical spots to the top 10 and sort everything else by tiers of similar quality. Starting with shows I dropped after just an episode or two, we’ll work our way up from the most atrocious offerings to the most tolerable. After that comes the completed titles, using the same “worst to best” approach. I’ll also highlight some anime films that came out/I saw this year before rounding this off with more in-depth thoughts for my top 10.

Sound like a plan? I’m ready if you are. It’s not everything under the sun, but here’s what my 2017 in anime was like. Enjoy the walk down memory lane. 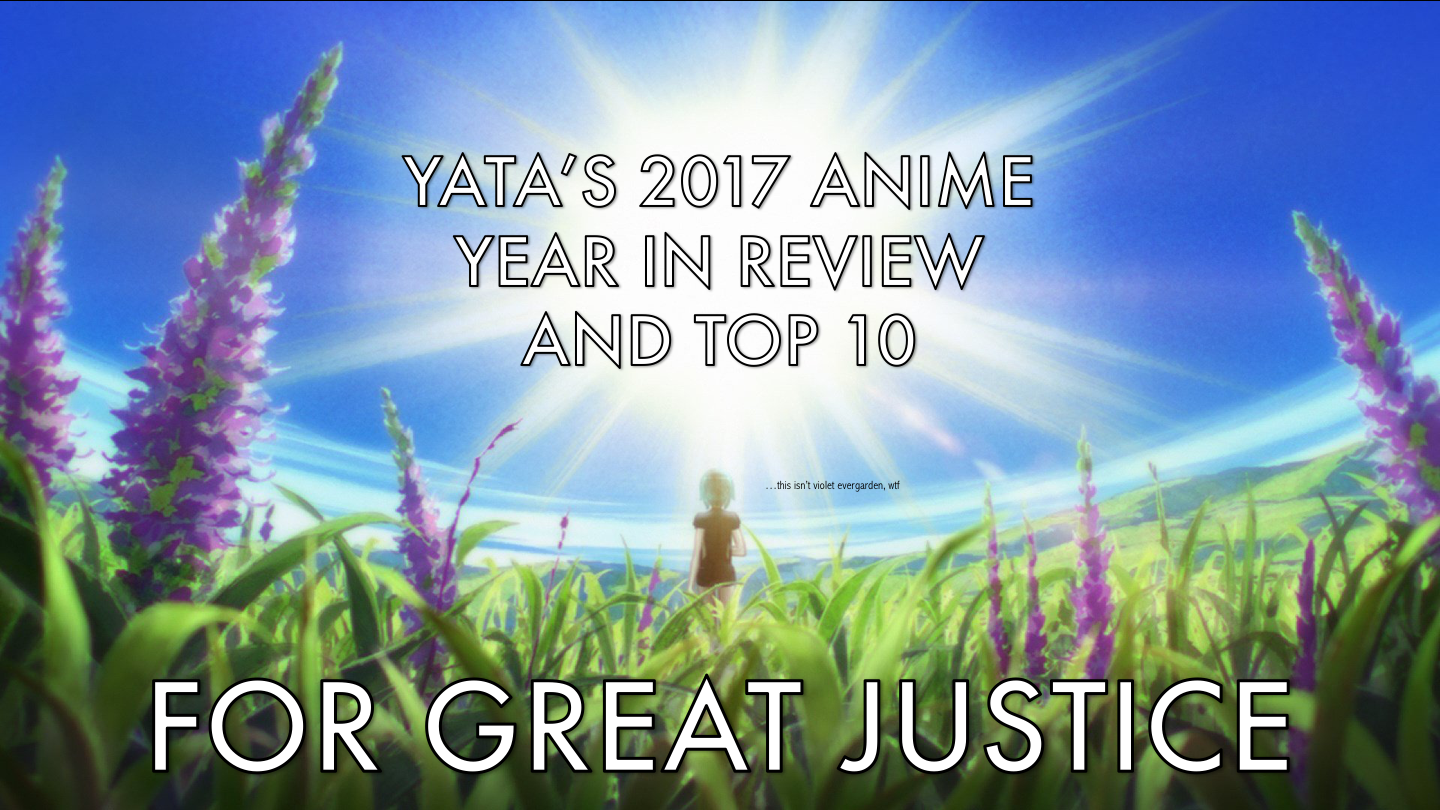 END_OF_DOCUMENT_TOKEN_TO_BE_REPLACED

So, 2016 has ended, and with its ending we have a chance to look back and examine all of the anime that came out this year. Now, 2016 actually ended a couple weeks ago, so I’ve decided to make it up to all you faithful readers out there by analyzing this year in the best possible way: By sorting my favorites into an numbered list, as well as having a quick look back at the Fall season.

“Why only the Fall season?” I hear you ask. Well, because I only wrote for this blog during that season.

So, without further ado… 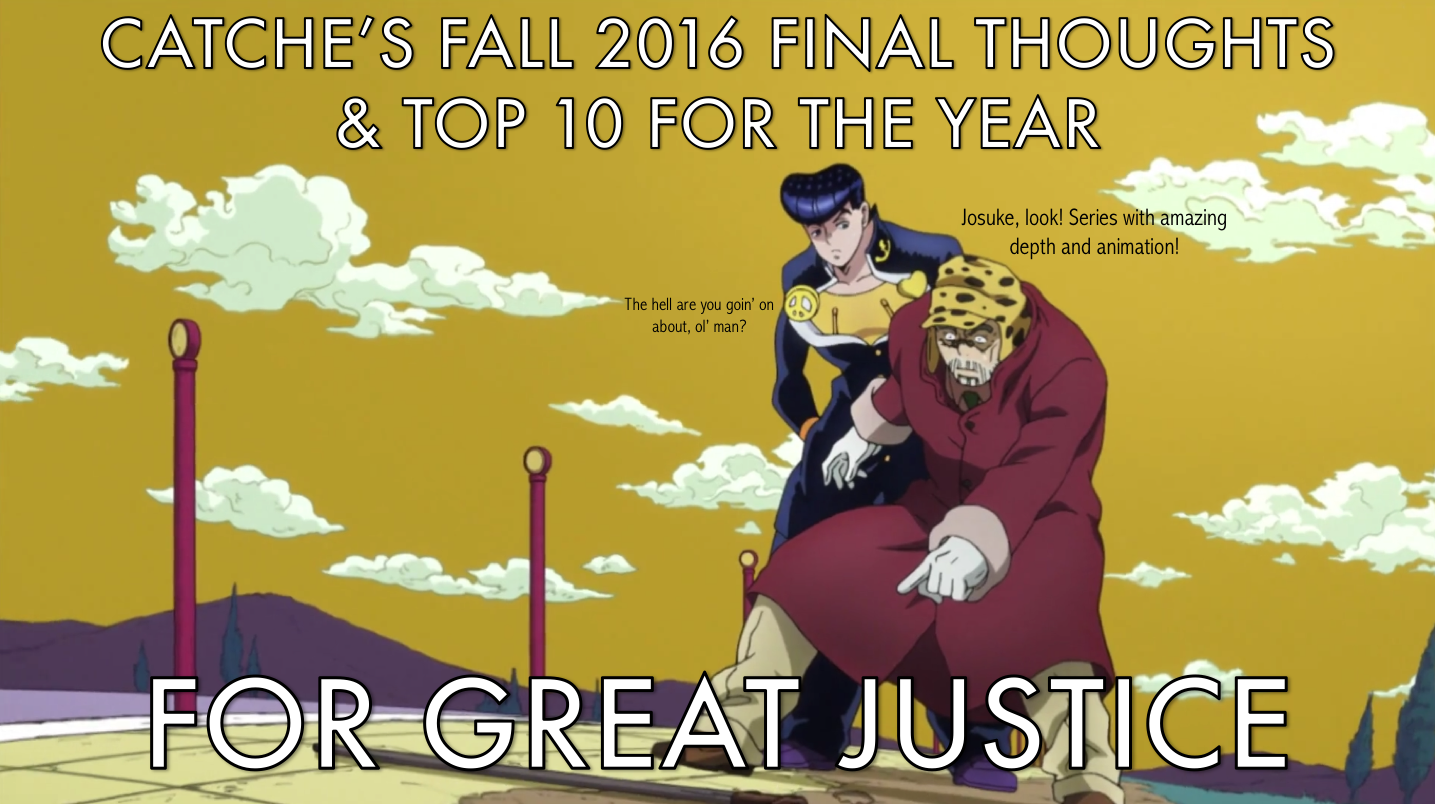 END_OF_DOCUMENT_TOKEN_TO_BE_REPLACED

So here’s the thing. Usually, my posts on here are directed towards people who already know what I’m talking about, those self-proclaimed “otaku” and anime junkies who keep up to date with the latest productions and headlines and just want to hear my opinions on them, no walkthrough necessary.

But writing with them in mind limits my audience, and for this 2016 recap, I want to be a little more inclusive. This article is for hardcore fans and anime newbies alike; those in the know can compare their year in anime to mine, while the casual watcher will be given an overview of everything I’ve seen from 2016 – one that, if I’m successful enough with this, will hopefully act as a guide to what I thought was and wasn’t worth watching.

I managed to finish just over 30 shows this year and give a shot to just shy of another 30 more. At a minimum, everything I watched at least one episode of has a name-drop below. Only the top 10 are properly ranked; the rest are categorized in groups sorted by how far I got through them (early drops, late drops, or completed/up to date), as well as what kind of impression they left on me. This will be a bit lengthy, so let’s just get right into it, starting at the very bottom with the immediately-dropped abominations and ending with the cream of the crop. 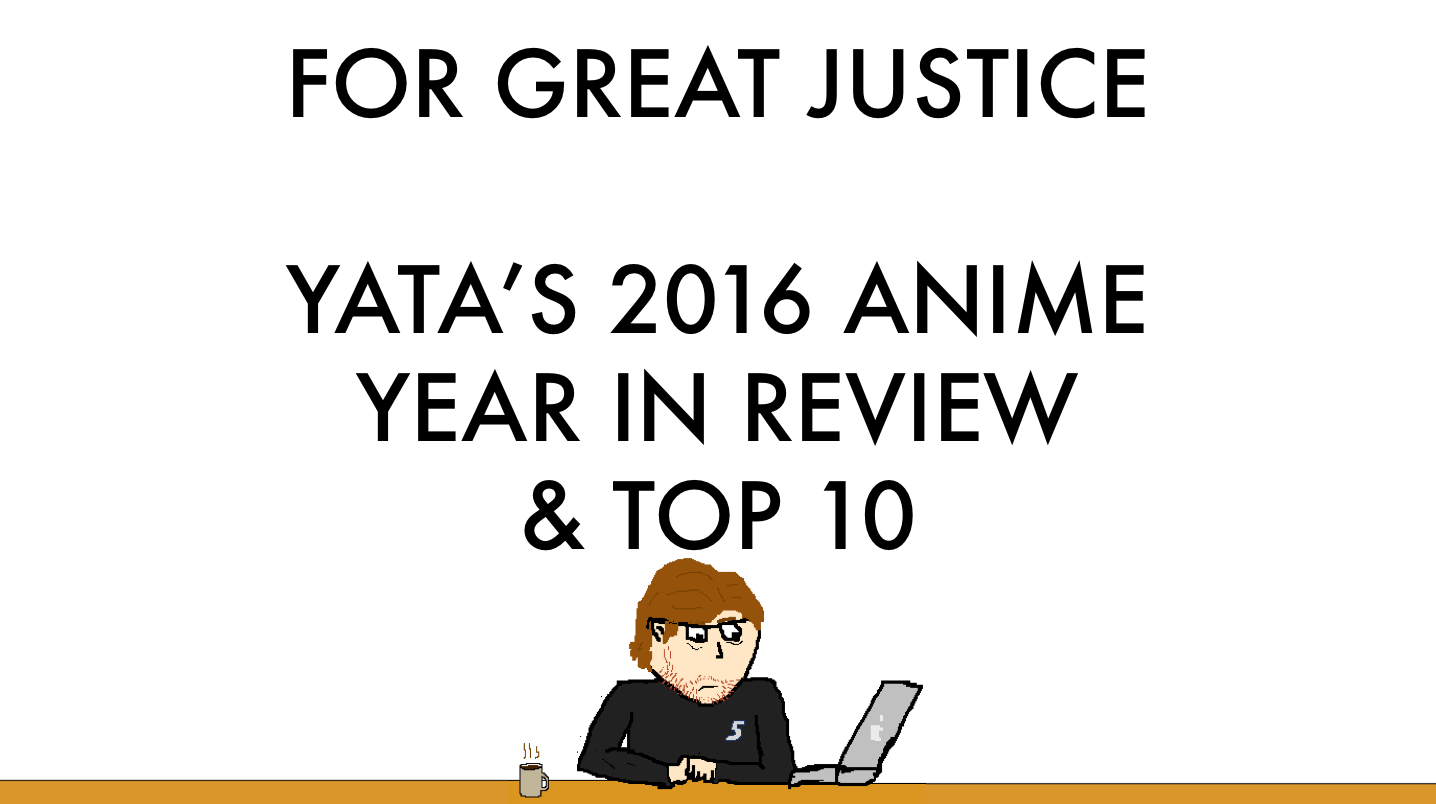